“I can’t express how much my full Liverpool debut means”

An elated Tyler Morton has struggled to express his emotions after making his Liverpool debut.

The teenage Academy prospect put on an accomplished performance at the base three midfielder as the Reds beat Preston North End 2-0 in the Carabao Cup fourth round on Wednesday night.

An impressive 45-minute display against Norwich City in the previous round earned the Wirral-born Liverpool fan – who has been at the club since the age of seven – his chance at Deepdale and he enjoyed every second of his 90 minutes.

“My whole family is here and the people who have supported Liverpool for years like my friends, they were there to watch me and it gets moving.

“Applauding the fans at the end is just a childhood dream and one that I have dreamed of since I was born because I have been coming to games since I was three or four years old. I can’t really express this feeling. “

Read the rest of our interview with Morton …

Tyler, it was tough at times but you managed to qualify for the next round, which is the main …

At the end of the day, it’s a cup and it’s about winning. If you lose you are out so it all depends on the result and we are obviously Liverpool – we want to perform well in every game. We expect to win every game and are just happy to move on to the next round.

It was your first senior start, so did it take you a few minutes to settle in and get in the game?

Yes, because I’m not used to first-team football and just got into it. I hope I have more chances to prove myself. At the start of the match it’s not like U23 or U18 football [because] you can’t really hear yourself thinking. The fans are loud and it’s a tough test but that’s what I like, a tough test.

It is about making impressions on the manager. The manager gives us opportunities [and] he is one of the best managers in the world, especially to provide opportunities. He gave me tastes, Neco [Williams], Owen [Beck], Harvey Blair, Conor [Bradley], Elijah [Dixon-Bonner], Kaïde [Gordon], he gave us opportunities and that’s what we need. We will do our best to impress. 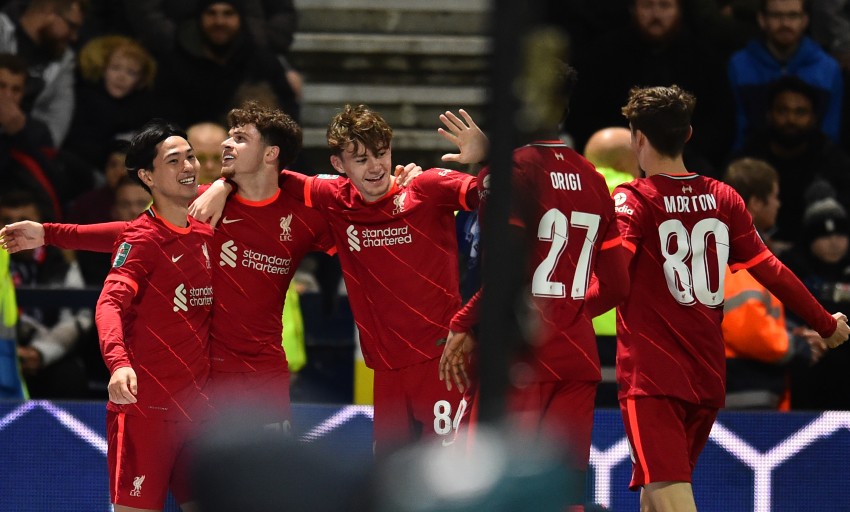 What has the manager told you since you started in the first team?

He congratulates us a lot, he wants the best of us and you can see he’s the best manager in the world in the way he trains young teams and always gets results.

I really take every game in my stride, regardless of the game, and I see how it goes. Whether I am in his plans or if I am not, I will always be happy to be a part of the club and that is how I am.